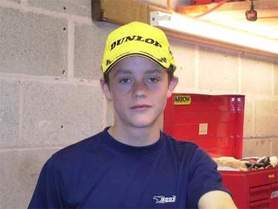 Best Racing Moments:  Being awarded the Best Young Rider of the Year 2006 and adding my name to the trophy
alongside such champions as Barry Sheene, Mike Hailwood and Jim  Redman, to name but a few.
Worst Racing Moments:  Leading by 9 seconds in an Aprilia Superteen Race at Snetterton  and the bike breaking down on the last lap!
Racing History